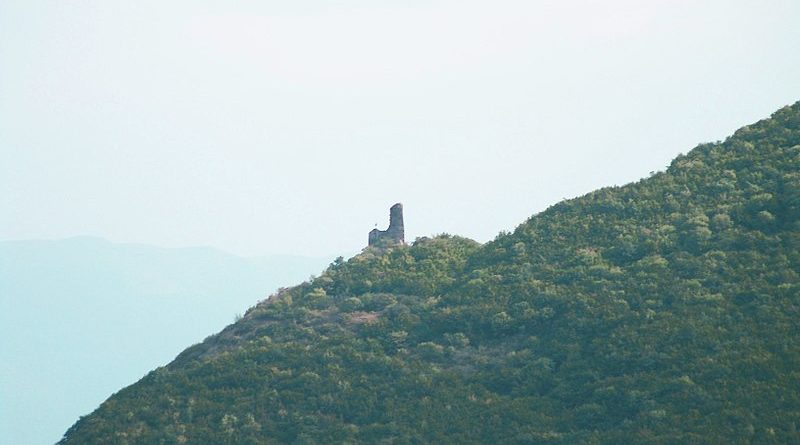 Kldemagala Fortress The same Arsena’s Fortress is located 5 km north of Kaspi, on the right side of the river Lekhur, on the high mountain. It dates back to V-VI centuries, with the later feudal period.

Kldemagala’s fortress overlooking the whole Lekhuri gorge, was locked up in the north and south of the Lekhuri Gorge, and defended the invading fortress of the city of Kaspi. The old name of the prison is forgotten. Now people call him Arsena’s castle. It is not mentioned in the name of “Kldemagala”

Destroyed the eastern and northern walls of the four-storey tower of the only surviving building, a large part of the western wall and partly south wall. The wooden floors overlap. The lower part of the first floor is filled with soil. The Tower – the length of the walls – 7,6 m, height – 11 m, thickness 2 m, was built gray and yellowish stone. The outer angles are slightly rounded. Stool used for cutting the wall thickness was used as a wooden roofing pillar. The black logs are molded. One of the high and narrow sparkles on the first floor’s southern wall. There were triangular roofs on the same floor (one is well protected). The traces of the hats are only on the fourth floor. This floor is different from the lower part of the tower. It must be completely built.

Kldemagala Fortress from Tbilisi is 61 kilometers and it takes about an hour and 10 minutes to cover!

Thanks for reading with us!